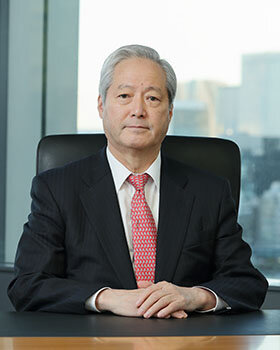 For the past 12 years in the private sector, Mr. Daisuke Kotegawa has served as director of board, research director, senior advisor and consultant for several Japan-based enterprises, research institutes and law firms.

Prior to his private sector career, Mr. Kotegawa served in the Ministry of Finance of the Japanese Government for 35 years, including in positions dealing with international finance and tax, trade, government investment and loan programs, and supervision over banking and securities business, among other positions.

Mr. Kotegawa was the Executive Director for Japan at the International Monetary Fund (IMF) and was in charge of the introduction of various new measures of the IMF to tackle the world economic crisis after the Lehman shock. Among other actions, he chaired the negotiation of the New Arrangements to Borrow, which successfully raised $ 600 billion for the IMF. He also served on the staff at the World Bank and in charge of IDA’s replenishment negotiation. He was in charge of the negotiation of the OECD Guidelines on Transfer Pricing and served as the vice chairman of the Committee on Fiscal Affairs at OECD, initiating the committee on Tax Competition which established the List of Uncooperative Tax Havens.

While in service at the Ministry of Finance, Mr. Kotegawa dealt with financial crisis in Japan in the late-1990s, including;

In 2003 Mr. Kotegawa established the Industrial Revitalization Corporation of Japan (the first publicly owned M&A company), as well as the business recovery fund in the Development Bank of Japan.

Mr. Kotegawa has been involved in a number of international negotiations including;

Mr. Kotegawa has been invited by the Chinese Government to explain his work dealing with the financial crisis in Japan in the late-1990s. He was the member of Special Task Forces of the Japanese Government to work on the reform of state-owned enterprises (SOEs) and Vietnamese non-performing loans (NPLs). He also serves as a board member of the Mariinsky Foundation. He enjoys a wide range of professional relationships throughout China, Russia, Korea, and Southeast Asian countries.

Mr. Kotegawa holds MBA from Stanford University and BA in Law from University of Tokyo.