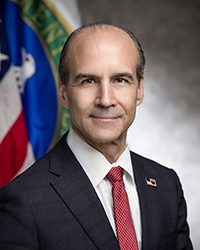 Mark W. Menezes is a former Deputy Secretary of the U.S. Department of Energy, a position which serves as the Chief Operating Officer over an agency comprising 120,000 employees and contractors, a $34 billion budget, the 17 national labs, and the nation’s nuclear deterrent programs and environmental cleanup obligations. Prior to being confirmed as Deputy Secretary, Mr. Menezes served as Under Secretary of Energy responsible for directing transformative energy progress and technology solutions through coordinated policy and budget planning, management, and innovation.

Prior to his federal executive branch service, Mr. Menezes was an executive at Berkshire Hathaway Energy after practicing law as a partner at Hunton & Williams LLP for ten years, heading the Regulated Markets and Energy Infrastructure practice group. In his federal legislative branch service, Mr. Menezes was Chief Counsel, Energy and Environment, to the U.S. House of Representatives Committee on Energy and Commerce during which he oversaw the passage of the historic Energy Policy Act of 2005. Mr. Menezes has also held positions within the energy sector. Before his service with House Energy & Commerce, he was Vice President with Central and South West Corporation, and upon its merger with American Electric Power, served as Vice President and Associate General Counsel for federal and state legislative and regulatory affairs.

For his service to the Department of Energy, Mr. Menezes was awarded its highest honor, the Secretary of Energy’s James R. Schlesinger Award. He was named in National Journal’s “Hill 100”—top Congressional staff for his work on both energy and environmental matters. He has testified numerous times before Congress, is a frequent speaker and lecturer before associations and civic groups, including legal education seminars where he has been called on to address the nation’s energy and environmental policies, utility restructuring, telecommunications, ethics, merger and acquisition practices, and regulatory and legislative processes. He has co-authored numerous articles, a practice manual published by West Publishing Company, and has been a contributor to network and cable TV broadcasts and quoted in the New York Times, Law360, Oil and Gas Journal, Politico, and other publications. He’s been listed in Best Lawyers in America 2013–2016, Corporate Counsel’s Top Lawyers 2006–2011, Washington Post’s Top Lawyers 2008–2016, and DC Super Lawyers 2012–2016.

Mr. Menezes is a graduate of Louisiana State University receiving both his undergraduate and juris doctor degrees. He is licensed to practice in D.C., Texas and Louisiana, and is a member of the U.S. Supreme Court Bar. Before being sworn in as Under Secretary of Energy, he was a charter member Louisiana State University’s Energy Law Center, and served on the Board of Directors of the Congressional Chorus & American Youth Chorus.